Pressure cooker mistakes almost inevitably stem from the fact that while the actual progression of cooking can be checked in normal cookware, this is impossible in most pressure cookers. A lot of approximation and guesswork is therefore needed, and this in turn translates into a range of mistakes that can produce soggy overcooked or tough undercooked food. Further, nutrients are destroyed or bacteria are left over if food is not cooked to just the right level. To avoid the embarrassment and risk involved in such mistakes, one should first be aware of the most common mistakes of pressure cooker users.

If you have an old pressure cooker or a cheap one, chances are you may have issues with the locking mechanism and/or rubber gasket that keep the pressure cooker sealed during the cooking process. Apart from malfunction, insufficient markings may lead to the lid being improperly aligned. Keep an eye out for instances of steam escaping from below the lid, as this may lead to improper cooking and much lengthened cooking times. Thankfully, most of the modern generation of pressure cookers will not start working until the lid is in place, so chances of such incorrect configuration are minimized.

One of the cardinal rules of pressure cooking is that the pressure cooker can evaporate only a fraction of the liquid that an open pan can. In other words, the water and/or sauces that are added to the foods should be kept to a minimum. Otherwise, the excess moisture in the pressure cooker will turn the foods soggy, tasteless and cause the nutrients to leach out into the gravy. This can ruin the overall texture of the recipe and if the gravy is not consumed, deprive the family of the nutrients that the food was supposed to provide.

Most people continue to follow the old pressure cooker recipes, which, by virtue of being made for different products, lead to culinary disaster. The most common result is overcooking, which, based on the extent, can make foods edible or inedible. Minor overcooking can make the meat/vegetables tougher, as the heat causes the moisture to move out. To rectify this, a minor amount of further cooking is needed, which opens up the fibres of the foodstuffs and lets the nutrients and flavors back in. Excess overcooking however causes the food to disintegrate, thereby releasing all flavors into the surrounding gravy and becoming a soggy mass of cardboard-like residue.

To avoid this confusing cycle of cooking and overcooking, it is ideal to find out exact cooking times for recipes meant for the foodstuff you are cooking. Recipe books sold by the manufacturer are good introductions to this end.

Cooking all foods at once

Unlike open pans, it is impossible to cook foods with different cooking times, together. For instance, many people make the common pressure cooker mistakes of adding vegetables of say cooking time five minute and meat of cooking time half an hour together, and then continuing the cooking till the time the meat is ready to be removed.

This process creates two problems – the vegetables are reduced to soggy nonentities with their flavors mixed to an unnatural extent with that of the meat and the sauces, and the release of these nutrients leads to interference with the creation of flavors in the meats. The result is an odd-tasting and mushy pile of food. To avoid this, it is better to partially cook the meats (or foods with longer cooking times) before adding the foods that require less time.

Though pressure cookers remove moisture at a very slow rate, the heat does cause the sauces to carmelize and then char at the bottom of the cooking pan. To avoid this, only dilute sauces, perhaps created in the process of cooking or made at home, are ideal for use. If thick sauces at all have to be used, they should be used in low quantities and the heat level should be kept lower than what would normally be used. This prolongs the food cooking process, so avoiding thick sauces is the best choice.

A last word of caution

Most of the mistakes mentioned above occur because people with no experience of pressure cooking transplant their oven or pan recipes to the pressure cooker, assuming that everything in the cooker needs lots of time and water. As seen, these cardinal mistakes lead to poor nutrition and chances of residual bacteria being present when the food is consumed. Avoidance of such mistakes though, is also simple and if the tips given in this article are followed, it should not be difficult to fall into any of the traps that the pressure cooker can represent for the novice. 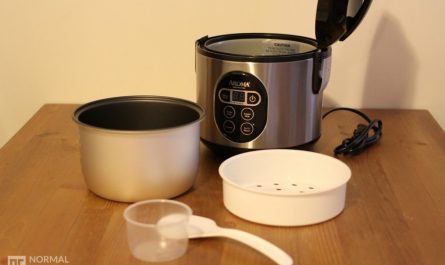 How to use a rice cooker ?

8 Tips for Safe Pressure Cooker Use